With full gratitude, we acknowledge the Tri-Cities is core territory of the Kwikwetlem First Nations people and lies within the shared Traditional Territories of the Tsleil-Waututh, Katzie, Musqueam, Squamish and Sto’:lo Nations. We honour the Ancestors and all relations who walked this land long before us.

The following organizations are championing children's rights in the Tri-Cities area. Find out how they are doing it.

Port Moody is one of the only communities in BC that does not have an area where 1 in 5 children or more live in poverty, but we are situated near neighbourhoods where over 50% of children live in poverty. We know in BC 50% of households are living paycheck to paycheck.  For children as well as caregivers, low quality and unstable housing can lead to negative mental health consequences. We also know that study after study has shown that investing in getting our neighbours off the street, or out of other dangerous situations, and into stable housing is much less expensive than standing by and not trying to help.  We are a community that cares about our neighbours and to that end we have been working both to advocate for broader systemic solutions related to homelessness and to find solutions in our own backyards.

In the lead-up to the very welcome announcement of BC’s first Poverty Reduction Strategy, Port Moody, Port Coquitlam, and Anmore, with Coquitlam being supportive of poverty reduction in general, endorsed the Poverty Reduction Coalition’s submission to the plan calling for an accountable, bold, and comprehensive plan that would see all ministries, including the Ministry of Housing and Municipal Affairs, working together; poverty is complex and housing is often the first step to breaking the cycle. This plan asked that the government for strong housing policy including “end[ing] homelessness and adopt[ing] a comprehensive affordable housing and supportive housing plan; build[ing] 10,000 new social & co-op housing units per year that low income people can afford; [and] Introduc[ing] stronger tenant protections.” Port Moody also sent a letter to the Ministry of Poverty Reduction and Social Development asking that municipalities and NGOs be given the tools to take part in the poverty reduction strategy.

Keeping our neighbours housed requires looking at all the barriers facing them, especially youth. Port Moody had the honour of being the second municipality to endorse the #AllonBoard Campaign started by the Single Mother’s Alliance. The strongest champions have been youth living in or aging out of foster care. The #AllonBoard initiative calls for free or discounted TransLink fares for people living in poverty and free transit for minors under 18 years of age, as well as swapping fines for community service. Such initiatives in other cities have had overwhelmingly positive impacts on the lives of youth, particularly in allowing access services to find employment and stable housing.

Port Moody is also dedicated to working with partners to find innovative and proactive solutions. Recently we passed a resolution to liaise with BC Housing to identify public and private properties that could meet criteria for shelter, modular, supportive or low-income housing, particularly for refugee families, women and children fleeing domestic violence, as well as for homeless youth and seniors. Port Moody has also shown leadership by partnering with non-profits such as Kinsight, SHARE and St. Andrew’s United Church of Port Moody to meet the needs of our neighbours. This new space will include a mix of flexible spaces, housing and family services, including 55 residential units of non-market rental housing. Port Moody is just starting to look at rental-only and/or inclusionary zoning, so we can ensure there are options for everyone; we are dedicated to exploring solutions for our community, so no one is excluded. Everyone should have the right to a home.

Coquitlam City Council endorsed the Housing Affordability Strategy (HAS) in late 2015 to guide the City’s approach to this challenging topic.  Through the HAS, Coquitlam's goal is to work with partners from the non-profit, private and public sectors to ensure that a wide variety of housing types, sizes, tenures and prices can be offered in Coquitlam in the years to come.

These expanded housing options can provide opportunities for greater housing choice and affordability to meets the needs of people at different stages in their lives. The hope is that we can provide more options for families between a too-small apartment and a too-expensive house, and smaller, more affordable options for seniors that don’t want to leave neighbourhoods they have spent many years in when the time comes to downsize.

The Strategy also recognizes that local government's mandate and resources to address housing affordability are limited without partnerships and funding from other levels of government.

Overall, the Housing Affordability Strategy has been a significant success story for Coquitlam, expanding both market and non-market rental housing in the community through incentives and cooperation with private, non-profit and senior government partners. Since the HAS was adopted more that 4,000 new purpose-built rental units are in the planning stage or under construction with an additional 600 non-market rental units for low-to-moderate income households.

In the decade prior to the strategy’s adoption, virtually no new rental units were built in Coquitlam. Overall, the City is now creating new market and non-market rental homes at nearly ten times the rate of previous years leading to a long-term increase in housing options in our community.

The City is also partnering with Habitat for Humanity to build housing for modest income families on City-owned land that offers options for affordable home ownership.

A cornerstone of the HAS is the Affordable Housing Reserve Fund (AHRF), which acts as the City’s financial contribution towards increasing the supply of rental housing options for low-to-moderate income households in partnership with other parties. It is an important tool for contributing towards affordable housing solutions, a goal of Coquitlam’s Housing Affordability Strategy.
For more information about the Housing Affordability Strategy, visit www.coquitlam.ca/housing.

The City of Port Coquitlam has partnered with Atira Women’s Resource Society and BC Housing to provide 89 units of housing for women, women and children and for women-headed families, 100 per cent of which will be nonmarket and affordable.

The project will be tenanted by women, children and families, with a focus on creating an intergenerational community that includes young women, women who are older (seniors) and well as single moms with children and single moms with children and partners. Priority will be given to women who currently live in Port Coquitlam and who are homeless (e.g. living in a transition house) or precariously housed (e.g. paying more rent than they can afford, living in a small or poorly maintained basement suite, etc.) and to women currently living in the Tri-Cities communities. Women from the Kwikwetlem First Nation will also be prioritized, as well as women whose children already attend school in the area. Only if the units are unable to be filled by women from the immediate community, will units be offered to women from outside the community. In this case priority will go to women who grew up in and still have family and support networks in the Tri-Cities area.

Study after study shows that safe, affordable and appropriate housing plays a central role in allowing women and families who are marginalized to re-establish their lives. Stable housing is, in fact, the foundation for positive change in the lives of women and their children. It reduces levels of stress and can change the perspectives of women by providing them the opportunity to empower themselves and therefore generate a positive, healthy and nurturing environment for their children. Housing at the Flint Street site will provide a safe, welcoming, affordable home for women and children, a home from which hope and possibility can flow.

Addressing needs identified in the The Housing Needs of Women and Their Children in the Tri-Cities and in the 2015 BC Rental Housing Index, the development will embrace a mix of women including single women, women and children (including women-headed families where there may be a male partner), single women who are older, and young women who are aging out of care; creating a community of women and families who have similar life experiences such as struggles with homelessness, poverty and experiences of violence/abuse. All leases will be in women’s names.

The development will also have a licensed, non-profit daycare of at least 37 spaces that will include infant, toddler and after-school care, and a community health centre, in partnership with the Fraser Health Authority, that will offer a family practice and could include space for independent family doctors, general practitioners and specialists, a pharmacy, a physio practice, and other health-care related businesses. Priority access to both the daycare spaces and the Community Health Centre will be given to the families living in the building and to families in the neighbourhood.

Moving forward with kids in mind.

The First Nations Education Steering Committee (FNESC) has produced a poster with the following principles that can be used in our learning environments. Download the poster.

Spirit of the Children Society

The Spirit of the Children Society walks in love, honor and respect to learn, share our identity, and heal together. Visit the main webpage and follow the programs and services links to learn more about program offerings and support services.

School District 43 has a number of schools throughout the district designated as Community Schools. These Community Schools create centres with diverse and enhanced opportunities, where students, staff, families, residents, agencies and businesses work together to support student learning, building stronger families and communities.

School District 43 Community Schools offer "out of school" programs that reflect the diversity, needs and learning opportunities for student parents, staff and both the general & business community.

These programs run during the 4 following seasons:

We are fortunate in the Tri-Cities to have parks, nature, recreation and leisure programs with a lot of thought for children and families. Check out the services and programs that keep children a top priority:

Visit your local library to find out more about the programs they offer that promote the well-being of children and families.

Visit the new Tri-Cities Kids Matter website to view resources and a list of community organizations providing services and programs for you and your kids. 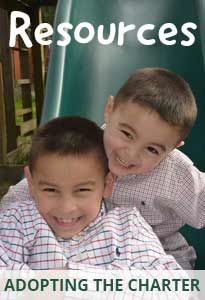 How you can adopt the Rights

Find resources such as the Charter of Rights in Farsi, Chinese and Korean, PDFs to promote the Rights, and external links about child rights.

Check out all our Rights in Action newsletters:

The ache from home lives in all of us, the safe place where we can go as we are and not be questioned. ”

Where we love is home - home that our feet may leave, but not our hearts."